Thylacines - Back to Life? 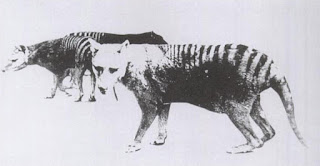 Could the (most likely) extinct thylacine, also known as the Tasmanian tiger, possibly be brought back to life through cloning? It may actually be possible, News.com.au reports. They have a new article up concerning this specific thing.

THE Tasmanian tiger has been extinct for more than 80 years - but that could be about to change.

Once considered a fanciful idea, it is now plausible that we'll see the resurrection of certain extinct species. Continual advances in science, particularly in the field of genetics, means that we are getting even closer to bringing the iconic Australian marsupial, and others, back to life.

Andrew Pask, a biologist from the University of Melbourne, was part of a team who worked for 10 years to successfully sequence the entire genome of a Tasmanian tiger, also known as a thylacine, with the help of a four-week-old joey preserved in a different solution to other damaged specimens.

Prof Pask referred to the preserved joey as the 'the Holy Grail' specimen and allowed researchers to piece together the full picture of the marsupial's 'genetic blueprint.'

The researchers completed the genome sequencing in December last year, gaining fresh insight about the animal.

'It was a very, very unique marsupial species. The last one of its kind.'

That uniqueness is exactly why we might want to bring it back to life - but it's a quality that also makes the process extra difficult.

Rapid advancements in technology are opening up the possibility of resurrecting certain species - or at least re-engineering something that looks close enough.

In particular, a cloning technique pioneered by Harvard geneticist George Church which is not too dissimilar to that imagined in Jurassic Park is at the forefront of the de-extinction movement.

His team is working to bring back the mammoth by using the DNA of its closest living relative, the Asian elephant, to essentially fill in the gaps of the mammoth DNA.

'That's something that's not science fiction any more, it's science fact,' Prof Pask said. 'They will be able to bring something mammoth-like back to life.' And it could one day open he floodgates for resurrecting other lost species.

'The thing with the mammoth is, there is a very closely related living species around still - the elephant - which makes the task much easier,' Prof Pask said.

'What you have to do is take the elephant DNA and make all the changes you see in the mammoth genome on the elephant's genetic blueprint. Basically you're just editing the (elephant) DNA to make it look like a mammoth.'

The fewer changes you have to make, the easier it is.

However when it comes to the thylacine, there's nothing really that closely related any more. The closest living relative is the numbat but it's still quite different.

'You would have to make a lot more changes to make the numbat DNA look like a thylacine but the technology for making those changes has gotten exceptionally easier in the last five or so years because of the people who are doing the mammoth work,' Prof Pask said.

It's foreseeable as the technology improves, it would be able to be applied to bringing back the thylacine. Or, more accurately, a numbat/thylacine hybrid which takes on the appearance and attributes of a Tasmanian tiger.

The major development in this field has been the advent of CRISPR-Cas9 which is essentially a tool being used by genetic engineers to introduce enzymes that are used by bacteria to target and destroy foreign DNA.

CRISPR has been referred to as a kind of 'molecular scissors' that allows scientists to easily, and more cheaply, edit DNA.

However CRISPR technology is still in its infancy and has only been used by scientists to edit genes for the past five years or so. Because tweaking the DNA of a numbat to produce something closer to a thylacine would require about 10 times the changes compared to the elephant/mammoth project, advancements in our understanding of the technology and DNA itself would be required before scientists set  about trying to bring back the thylacine.

At this point, researchers will be waiting to see the long-term results of the mammoth project before they start applying the same technique to other extinct animals.

'We'll wait and see what it looks like, how it behaves and all of those things and whether we could apply that same technology,' Prof Pask said.

But if it does come to pass, our continent could once again be host to one of Australia's most iconic lost species.

The thylacine vanished from the Australian mainland about 3000 years ago. A thylacine population survived in Tasmania long after the demise of their mainland cousins, but a bounty was placed on their heads in the 19th century because they were believed to be responsible for sheep deaths.

The population went into rapid decline. The Tasmanian government introduced official protection for the species in 1936, but came too late. Just two months later, the last known thylacine died in captivity.

Searches for the thylacine have continued ever since, with some enthusiasts adamant they have seen living tigers in recent decades, but of course any proof has been lacking.


It sounds like a crazy idea, but could it potentially work?

I'm not sure where I stand on this whole "reviving extinct species" thing - I'd like to hear what my readers think about it.