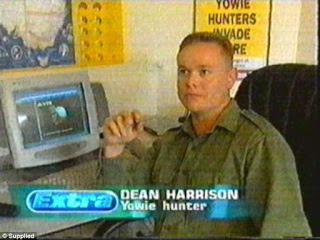 Zoe Zaczek writes on The Daily Mail: "A man who claims he has been attacked by a yowie on two occasions has pleaded guilty to assaulting his neighbour."

On Wednesday, Yowie researcher Dean Harrison pleaded guilty to punching his neighbor in the face several times and knocking him unconscious, after Harrison complained about the neighbor's noisy dogs. The man visited Harrison with his mother on January 20th to have a calm conversation about the noise problem.

"The trio engaged in calm conversation before Harrison suddenly bashed the victim. The attack was captured on video footage and played for the court. Following the altercation, the victim was taken to Gold Coast University Hospital for treatment."

Harrison's defense lawyer Angus Edwards argued that he was struggling "with emotional stress as his 17-year-old daughter was experience issues at the time of the out-of-character assault." Edwards also told the court that Harrison had written an apology letter to the victim.

The court also got the hear how Harrison has a "leading role in the cryptozoology field, which has taken him to the Amazon and the Solomon Islands," that he has appeared on the National Geographic channel and runs a website called Dean Harrison's Australian Yowie Research.

The Daily Mail says: "The website defines yowies in Australia as part of the Australopithecine species based on sightings of 'ape man-like creature' or 'hairy man.' In response to skepticism about the yowie population, the website reads: 'It's obvious. Why? Because I've seen.'"

The article concludes: "Harrison was sentenced to 12 months in prison, wholly suspended for two years, and was ordered to pay a $2,000 compensation fee to the victim."

I don't really think saying you're a Yowie hunter would be a good defense in court.