The Demon Cat of Washington, D.C. 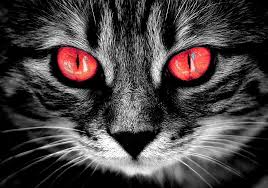 Is the United States capital home to a demonic feline that haunts America's most famous buildings?

According to legend, the cat - all black - can be seen before presidential elections and as a warning of tragedies, as well. The story dates back a few hundred years after cats were taken to the basement tunnels of the Capitol Building to take care of mice and rats. The current ghost cat is one of those that were brought to the Capitol Building and never left. Not even after its death.

The demon cat (D.C.) is said to live in a crypt in the basement of the Capitol Building, originally built as a burial chamber for the first president of the USA, George Washington.

Over the years, many stories have appeared of people who supposedly saw the cat. It was allegedly seen the nights before presidents Abraham Lincoln and John F. Kennedy were assassinated and before the stock market crash in 1929. It is said that in the 1890s guards at Capitol Hill fired their guns at the cat, only for it to disappear.

Normally, the cat is the size of a house cat and fully black in color - though it has the ability to grow to "the size of a tiger" in some cases. The cat sometimes pounces at witnesses, only to disappear before it catches them. Other times, it is said to explode. Supposedly someone once died of a heart attack after seeing the feline fiend.

The U.S. Capitol Historical Society has stated that the legend of the demon cat started around the final days of World War II, when the Capitol Police would commonly hire relatives (unqualified) and friends as favors, and these friends would commonly be drunk while they were on patrol. A security guard was once licked by a cat as he was laying down (and drunk), and thought he was still standing and that the cat was a giant. This, the Historical Society says, started the legend of the demon cat. Member Steve Livengood has said that "eventually the other guards found out that they could get a day off if they saw the demon cat."

Some say that shallow cat paw prints at the Capitol Building are evidence of the existence of the demon cat. However, the building was damaged by a gas explosion in the late 1890s, and in some places fresh concrete was laid, and Steve Livengood says "it's quite possible that a cat walked across the wet concrete." The initials "DC" are scratched into the floor in another part of the building, and some think they are there because of the presence of the cat.

Livengood has not heard any modern stories of sightings of the demon cat. And though it is folklore, he still feels that it is important in the building's history. To finish out the article, let's turn it over to him again: "They [ghost stories] humanize the building. One of the things I try to get across to people as I'm giving a tour is  that the spirit of the people who built the building and the people who have acted out history in it are still there. And you can feel it."

*This post is #5 in a series concerning legends and folklore of monsters and paranormal beings throughout the USA. Check the label to see the others.*