Searching for Bigfoot in New Jersey

By Tyler May 10, 2018
Recently some stories have been circulating concerning a possible Bigfoot sighting in New Jersey. The Burlington County Times is running a new article about Eric Spinner, a local investigator who is looking into the reports.

Eric Spinner investigates Bigfoot sightings in New Jersey. The latest occurred on April 7 and he said he deemed it credible.

The report that Bigfoot was spotted in the woods of Manchester came on April 7, and the next day Eric Spinner, an investigator with the Bigfoot Field Researchers Organization, was on the case.

'We met with the witness and recreated the scene,' said Spinner, a Bigfoot enthusiast who owns Health Haven II, a health food store in Medford.

A couple claimed to have seen a large, hairy creature leap across a road in the Brendan T. Byrne State Forest. Spinner and another BFRO investigator interviewed the couple.

'We found their story credible,' he said.

'When people say wild things like, 'It was ten feet tall,' or it had fangs, I know it's probably not true,' he said.

The couple told Spinner they were near swamplands not far off Route 70 when the woman, who was driving, glanced in the rear view mirror.

'She saw this thing running and leap across the entire road,' Spinner said. 'She said it looked like a ballerina, the way the legs were splayed.'

The couple, who wish to remain anonymous, stopped the car. They heard something crashing through brush followed by a splash, presumably when it, whatever it was, jumped into the swamp.

'And that was the encounter,' Spinner said.

Spinner and his BFRO colleague recreated the 'leaping Bigfoot' scene at the approximate location of the sighting, with the woman's husband playing the part of Bigfoot, he said.

'We had him try to run across the road and leap. He could barely make a quarter way across,' he said.

To Spinner, there is no question of the existence of Bigfoot, also called Sasquatch, the large, hairy monster-like thing said to inhabit the remote forests of North America, particularly in the Pacific Northwest.

He has been interested in the creature since he was a kid on Long Island, New York, where he saw the 1975 docudrama, 'Sasquatch, Legend of Bigfoot.'

'For a month, I didn't sleep well. I thought a hairy arm was going to come through the window and grab me.'

Moving to South Jersey in his teens, he never gave Bigfoot much thought. But in 2006 he stumbled across the BFRO web site. His interest was rekindled. It was the same year he said he encountered the creature on a squatching expedition in the Allegheny State Forest in Pennsylvania.

He was camping with another researcher at a place where a Bigfoot had been 'thermed,' that is, detected on a thermal sensor. In the early hours of the morning he heard something approach his tent.

'It crouched down, I can hear it breathing, and the next thing I knew, there's a hand pressing on the fabric of my tent. Not a bear. A bear has claws, and it would have cut through my tent. My heart was pounding.'

A vehicle approached, and the thing took off through the camp, leaping over a fire ring and vanishing into the brush.

'I can hear it crashing into the woods,' he said.

'We had activity every night,' he said.

Since then he has conducted his own research, leading expeditions throughout New Jersey, recording screams, tree structures, 'rock clacking' and tree knocking, all said to be tell tail signs that Bigfoot is near.

'I probably have more boots on the ground experience investigating Bigfoot than most people on the eastern side of the United States,' he said.

In his shop, he displays a plaster cast of a big foot, which he believes is from a Bigfoot. He found on a bank of the Mullica River near Chatsworth.

'Bigfoot's a flesh and blood creature,' Spinner said. 'I believe it's a primate. I think they're a hominid, probably a blend of ape and man.'

He, like his fellow enthusiasts, believes the Bigfoot-Giganto Theory, which states that Bigfoot is an anthropological remnant of another age. It may be related to Gigantopithicus, a large ape that crossed the Bering land bridge into North America 10,000 years ago, and has been hiding out ever since, including in New Jersey.

Since the early 1950s, there have been 69 reported Bigfoot sightings in New Jersey, 13 of them in Burlington County, according to the BFRO web site.

The earliest case from a woman who recalled encountering Bigfoot as a child while on a Girl Scout camping trip near Chatsworth in 1952 or '53.

Other sightings were reported in Medford in March 2010, in Crosswicks in the Fall of 2003, off the Garden State Parkway in New Gretna in 1998, and near the Wading Pines campground in Chatsworth in May 2013.

'The Pine Barrens offers everything they need - food, water, cover. It's temperate,' he said.

Probably you have nothing to fear from Bigfoot. There has never been a report of Sasquatch eating a human being.

'They really don't want to antagonize us,' he said. 'They're shy.'

In the pines, with every breath you take and every move you make, Bigfoot will be squatching you.


As always, I have some thoughts and questions about this article.

First of all, Spinner says he finds this report credible. Why? From what I know, there is absolutely nothing to go on except the eyewitness testimony which has been proven time and time again to be unreliable.

Spinner says that he knows "fake Bigfoot news" when he hears it. But how can he? If Bigfoot is not known to be real, and if it is real science knows nothing about it, how can he know what traits a real Bigfoot should have? He says they can't be ten feet tall or have fangs or other traits, but over the years many other investigators have accepted such reports. And there have been many times when people have tricked investigators into believing made-up stories.

I also find it funny how they capitalize "the Bigfoot-Giganto Theory" in the article to make it seem like that is a real and/or plausible thing. The rest of the info on Gigantopithicus is inaccurate as well - there is no fossil evidence that it ever crossed the land bridge into North America from Asia.

There's also a picture of Spinner and his footprint cast that was mentioned in the article on the Burlington County Times website. It looks like a vaguely-foot-shaped, human foot sized not-Bigfoot-evidence piece.

The only somewhat-good thing about this article is the Police reference at the end - though it is a little cringe-worthy too.


And to finish off this post, here's part of a conversation I was having about this. Readers who share my views will enjoy! 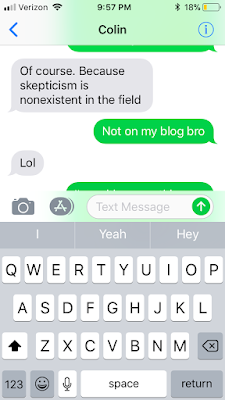 If you don't, I'd love to be proven wrong.