Extinct or Alive - Coming in June 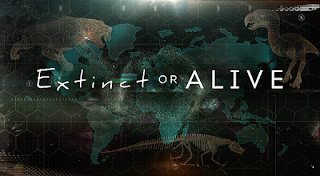 A new series is premiering on Animal Planet next month and it might actually be kind of interesting. A popular aspect of cryptozoology is the possibility that some extinct species may still be hiding out in remote regions of the world. The new show, called Extinct or Alive, will be about the search for these animals.

What if extinct animals weren't really extinct? The methods used to declare a species extinct are not as fool proof as people might assume. From eyewitness accounts to last known photographs, there is evidence that suggests some of these creatures are still very much alive in the wild. The search is on for wildlife adventurer and biologist Forrest Galante, as he explores the real stories behind animals thought to be gone forever and tries to prove their existence so he can protect them and help them thrive again. EXTINCT OR ALIVE premieres on Animal Planet on Saturday, June 10 at 9PM ET/PT but you can catch a sneak peek episode during Monster Week on June 3 at 10PM ET/PT.

The season kicks off with a must see two-hour premiere, where Forrest explores the magical and mystical jungles of Zanzibar in search of the Zanzibar Leopard, an animal thought to be extinct for over 25 years. It's a history-making expedition in which Forrest reveals species that have never before been filmed and captures evidence that leads to an unforgettable conclusion. The hunt for other extinct animals will take him trekking through Taiwan fro the beautiful Formosan Clouded Leopard, the frozen tundra of Newfoundland for the majestic Newfoundland White Wolf, and to the incredible island of Madagascar to look for any trace of the giant Pachylemur.

From the Florida everglades to remote jungles, the cameras follow Forrest Galante as he meets and listens to locals, some of whom claim to be eyewitnesses of animals we thought were no longer in existence. Armed with the information and clues, Forrest sets out to prove the unimaginable, and be the voice for species the world has given up on.

Two years ago during Monster Week, Forrest Galante was on Extinct or Alive: The Tasmanian Tiger, in which he searched for the titular animal. I thought it was one of the best cryptozoology-themed shows I had seen in a long time, and if the other episodes coming are like it, they may be pretty good as well. Let's hope...

I would also bet that the Tasmanian tiger episode may be the "sneak peak" during Monster Week this year.