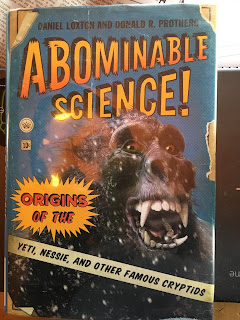 In 2013, Daniel Loxton and Donald R. Prothero's book Abominable Science! Origins of the Yeti, Nessie, and Other Famous Cryptids was published.  This book caused quite a bit on controversy within the cryptozoological field at the time of its release and continues to do so today.

Loxton is someone who became interested in cryptids as a kid and believed in the existence of Bigfoot, Nessie, and other monsters at the time, but then became skeptical of their existence, but still interested. Prothero is a paleontologist.

I decided to get Abominable Science! after hearing Donald Prothero on Colin Schneider's Crypto-Kid podcast a few months ago. I thought Prothero made some really great points about cryptids and the people who search for them, and he and Loxton both do in this book.

But then, why do so many people in the cryptozoological community hate it so much?

I decided to look into this while the book was on its way. So, I went to the best place to find out what people think about books - the ratings section for Abominable Science on Amazon.

I decided to look specifically at one-star reviews of the book to see why people disliked it. I was surprised (but at the same time not surprised) by what I found.

It turned out that I knew who a lot of the one-star reviewers were. And, most of them just bash on the book immediately because they are "believers" in this or that cryptid, and Loxton and Prothero don't share their views that the creatures are real. For example, some reviews are from:

And that's when I realized that the above reviews are the reason I didn't want to get this book when it came out a few years ago. There was a time when I was on the "believers" side and would have held some of those people in high regard. But I've come to realize that belief is one of the things that ruins cryptozoology. Believers hate the skeptics because they say that their cryptids are not real. But, at the same time, they only try to prove that the cryptids are real, and don't actually do good investigating. They should be trying to find out what the answers are, not try to prove one idea or another.

The chapters are split up between Prothero and Loxton. Prothero writes the chapters on "What is cryptozoology," yeti, mokele-mbembe, and the final chapter on what cryptozoology is like today. Loxton wrote the chapters on Bigfoot, the loch ness monster, and sea serpents. In each chapter focusing on a specific cryptid, the authors explain why there is really no evidence out there for their existence, and why believer's "claims" do not add any evidence to that non-existent pile.

Is there any reason to be mad at the authors for doing this? No, none at all. This is one of the best cryptozoology books I've ever read, and I think anyone seriously interested in the subject. Though the full-blown believers will still try to trash on the book, it deserves none of it.

Another reason this book is very important is that it shows what cryptozoology could be if those who were active in it did real scientific research. All too often, cryptozoologists are only "weekend warriors" who claim to be "experts" on creatures that, if they are real, we know nothing about. And almost all of the other "scientists" who have investigated cryptids and are championed by cryptozoological researchers are either not real scientists at all, or trained in fields that would not apply to the cryptids they are investigating, if they exist.

All cryptozoologists  -  check out Abominable Science!