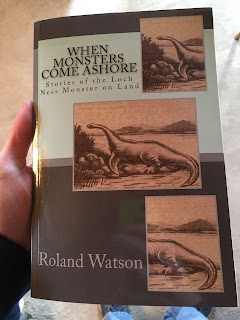 In February, Roland Watson published his second book on the Loch Ness Monster - When Monsters Come Ashore: Stories of the Loch Ness Monster on Land. As is evident from the title, the book examines sightings of Nessie on land. Some of these encounters are very famous within cryptozoological circles (such as the Spicer and Grant sightings), and some are more obscure. Watson includes stories from the late 1800s to 2009.

I recently got and read this book. I have always found the land reports of Nessie quite interesting, and this is the only book that focuses fully on this aspect of the mystery.

However, while I wanted to like this book, I found that hard to do. And I will explain why.

Roland Watson is definitely on the "believers" side of Nessie-hunters and says so in the book. His description of his blog on the subject is "reclaiming the Loch Ness Monster from the current tide of debunking and skepticism."

I think that is what ruined this book. While I find the reports of encounters interesting, I don't think there really are any "monsters" in Loch Ness so the land sightings are very suspect to me as well. And, being on the "believers" side of things, throughout his book, Watson pains more skeptical researchers (and scientists) as the "bad guys" who just say "every sighting is a hoax or misidentification!" He criticizes skeptics for not "thinking the LNM is real" and coming to a different conclusion, even if he thinks the description is of something unknown. But, at the same time, he concludes that basically every land sighting of Nessie must be a monster, even if descriptions vary between witnesses and sometimes even the same person! When this happens, Watson says its only "false memories" that have come on over time, or if it is too early for that, conveniently pushes the inconsistencies to the back, not to look at them again.

I feel like this could have been an excellent book if it was done right. But, since Watson wants to believe in the Loch Ness Monster(s), he basically concludes every land sighting is true, even though they are all inconsistent, and the details of individual accounts usually don't match up with the same account! While this is an accomplishment for being the first full book on the subject, I feel like it could have been much better if it was not from a "believer's" standpoint. I'd bet these sightings weren't of a lake monster out on a stroll on the land. But what were they? In this book, you just get "LNM" and nothing else. A more skeptical approach is in order for a good examination of the reports...