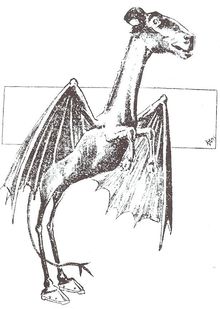 Trying to explain an unknown with another unknown is never good…

From the Bucks County Courier Times:

That time you and your friends saw the Jersey Devil in the Pinelands? It was probably Bigfoot.

The theme for the annual Lines on the Pines festival was the Jersey Devil, so it was a surprise to see Mike Familant's Bigfoot booth.

"I think a lot of Jersey Devil sightings are really Bigfoot," he said.

"I'm serious. There are tons of Bigfoot sightings in New Jersey," Familant said, standing at a table with a selection of plaster Bigfoot feet and video from "In the Shadow of the Big Red Eye," which is his YouTube show documenting his hunts for the woodlands-dwelling creature.

All around him at  the Stockton University Campus Center, where Lines was held Sunday, was a celebration of "JD," as some locals call South Jersey's best-known cryptid. There were pictures, books and even a flower arrangement depicting the Jersey Devil in his winged glory. Just feet from Familant's Bigfoot booth was a Jersey Devil, which growled and flapped its wings as it posed for photos with visitors to the show.

"I get it. The Jersey Devil has been around a long time down here. He's popular," Familant said.

It's not that he isn't open to the existence of the Jersey Devil. Nevertheless, he said his research persuades him that, in many cases, JD is really BF.

Familant is a field investigator for Sussex County Bigfoot, in Sparta, where he lives and works as an EMT. The group leads expeditions in search of the elusive sasquatch, described as 7 feet tall, with glowing red eyes and a terrifying shriek. Though Familant has never seen the thing, he believes he had a close encounter on a camping trip in Florida.

"We heard tree knocks," he said.

"Tree knocks. It's how Bigfoot communicate with each other," he said.

Rocks were mysteriously hurled into camp. A search discovered the closest matching rocks were almost a half-mile away.

"No human can throw a rock the size of a small boulder 850 yards," he said.

"When I first came down to the Pine Barrens, I was thinking, this is Jersey Devil country. But the more I've looked into it, the more it's a misidentification. You have this mythical story that, I think, turned the Jersey Devil into something really odd, with bat winds and is flying around."

The 18th-Century legend began in Atlantic County with the birth of a 13th child to Mrs. Leeds, who cursed the baby as the devil's own. The baby morphed into a winged phantasm, killed a midwife and flew up the chimney. It has frightened kids and moonshiners ever since.

"To me, Bigfoot is an undiscovered intelligent bipedal primate that lives in dense forests in North America," he said. "I've never seen one in person, but I have done some studies specifically in New Jersey you might find interesting.

"Every third year, (Bigfoot) sightings increase 70 percent. Now these sightings run in a counterclockwise motion around the state, as I said,  every third year. Bigfoot are nomadic. They travel. When I'm looking for Bigfoot, I look for what they need. They need food, shelter, water and a travel path. The Pine Barrens fit that. There's a train track that runs right through the middle of the Pine Barrens that's not used anymore. It's a Bigfoot highway."

Several people were bemused to learn that the Jersey Devil could be mistaken for Bigfoot, among them V. Scott Macom, a lawyer who lives in Smithville. Macom was at Lines selling copies of his novel, "Devil Leeds." His book's story line about the Jersey Devil is informed with original research into the phenomena, he said.

Macom said he first heard about the Jersey Devil on a YMCA camping trip at Camp Ockanickon in Medford.

"The camp counselors said if we left camp after dark, we'd be eaten by the Jersey Devil," he said. "Did I believe them? Hell yeah. I was 12."

In his novel, he never describes the Jersey Devil, because there have been so many eyewitness descriptions that, added up, don't make sense. (Put them all together and you have a demon that looks like a flying kangaroo.)

"In the book, I just leave it up to imagination, except for two blood red eyes that stare at you from the woods," Macom said. "Let your imagination fill in the rest. The gap between what we think is real and what is real is what scares us. It's the unknown, like the Jersey Devil."

Linda Stanton, founder and president of Lines on the Pines, was surprised anyone could confuse either specter.

"The Jersey Devil has cloven hooves. Bigfoot has big feet," she said. "There's a difference."


First of all, the Jersey Devil cannot be a real thing, since descriptions of how it looks have varied wildly over the years. The whole thing is just folklore that has survived for many, many years.

Second of all, you can't try to explain something that is a mystery with something else that is a mystery. How does Familant know the Jersey Devil sightings must be Bigfoot? How does he know what Bigfoot is like, if it even exists? He talk about "Glowing red eyes" and "screaming" as being Bigfoot characteristics… but how do we know that if it is not known to be real, and not accepted by science?

The Jersey Devil is no Sasquatch.