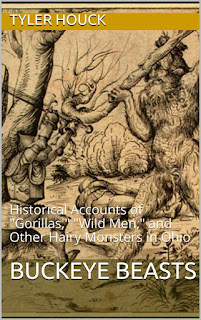 My new book Buckeye Beasts: Historical Accounts of "Gorillas," "Wild Men," and Other Hairy Monsters in Ohio is now available on Kindle on Amazon.com. The paperback should be available within a day or two.

The book examines reports of wild men and other things of that nature in Ohio from the mid-1800s through the 1940s.

Below is the book description:

Throughout the 19th and early 20th Centuries, encounters with "wild men" were commonly reported in newspapers around Ohio. Many cryptozoology researchers think these reports of wild men, "gorillas," "hairy men," and "anthropoids" could be historical accounts of Bigfoot-like creatures. In this book, author Tyler Houck examines these reports spanning from 1869 to the 1940s. Many are presented here as they originally appeared and are then compared to modern Bigfoot reports and other historical and contemporary reports of strange, man-like cryptids from around the world. Is this all something to do with mythology and folklore, hoaxes on slow news days or misidentifications, or is there something else behind the stories?


And here's the contents:

5. Comparison to Modern Accounts
6. A Folkloric Phenomenon?
7. Conclusions
Bibliography
About the Author

I will update things when the paperback is available…


Spread the word… and if you read it, leave a review… 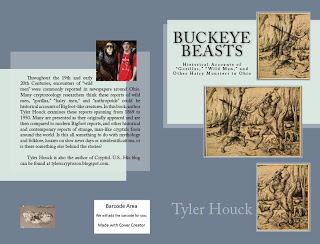