By Tyler March 26, 2018
In January of this year, Tim Renner published his book Bigfoot: West Coast Wild Men. The book is a collection of old newspaper accounts from California, Oregon, and Washington from the 1800s to early 1900s. It is a somewhat follow-up to his 2017 book Bigfoot in Pennsylvania. 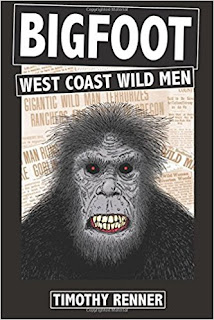 The majority of the book is taken up by the old newspaper accounts themselves. The author focuses on one state at a time, and each state is split up into several chapters, each focusing on a certain time period (ex., Washington 1900-1920). At the end of each chapter, Renner gives a list of the articles and papers they originally appeared in and comments on some of them, either to compare them to modern bigfoot accounts, rule them out as hoaxes or humans, or examine them in some other way.

If you are someone interested in historical accounts of wild men or Bigfoot, definitely check out Tim's book. It's not that long of a read but the stories are interesting and some of them are very entertaining!