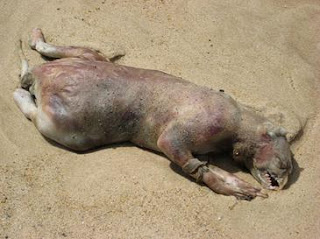 The infamous "Montauk Monster" was discovered just over 10 years ago, on July 12, 2008, in Montauk, New York. Jenna Hewitt took a photo of the strange-looking animal remains that soon after, as quoted from the website Dan's Papers, which posted a new article on the creature on the anniversary, "broke the internet."

The story first broke on July 23, 2008 when The East Hampton Independent gave it the headline "The Hound of Bonacville." On July 29, the website Gawker ran the story and it became viral news. Also on July 29th, cryptozoologist Loren Coleman put up a post on Cryptomundo and asked "what is this animal?" Coleman also coined the name "Montauk Monster."

No one really knows what happened to the carcass after it was discovered, though it has remained a very popular "modern cryptid," with people still speculating as to its origins today, 10 years later.

Was it a real monster? A secret experiment? Probably not. More likely - a dead raccoon!