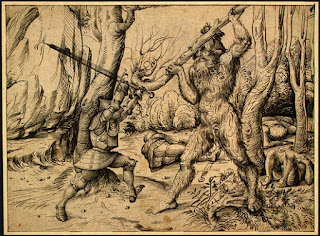 Many people look at historical accounts of "wild men" and point to them being sightings of Bigfoot. Is this really the case? There are, at least, similar accounts from different parts of the world. We'll take a look at a few below.

The following account is from the June 10, 1897 Marion Daily Star (Ohio). The headline was "Wild Man Seen Again - He Wears Nothing But Hair, Which is Long and Curly." It read: "The wild man who created so much terror among the inhabitants near Rome, O., several weeks ago by his strange actions has again been seen. Charles Lukins and Bob Forner, while cutting timber a few miles from Rome, claim they encountered a wild man and after a severe struggle say they were about to drive the gorilla-like object into his supposed retreat among the cliffs."

It continued: "They describe the terror as being about six feet tall and his only covering, apparently, a mat of long, curly hair. From their description of the supposed wild man he is undoubtedly the same seen a number of times several weeks ago."

"Women and children are now more thoroughly frightened than ever and are afraid to venture from their homes lest they meet the wild creature. A posse of determined men will scour the country now until the terror is located and captured or killed. - Cleveland Plain Dealer."

The Daily Union paper of Sacramento, California, ran a story on November 1, 1879 called "A STRANG CREATURE - Two Hunters Chased by a Wild Man in the Antelope Mountains." Two men hunting in the Antelope Valley, Peter Simons and John Gore, had been hunting ducks all day and in the evening were waling along a trail in "the wildest place in the Antelope range of mountains." The paper notes that "a few years ago [the area] used to be infested with the larger species of wild animals."

Simons and Gore made their way around a "large chasm" and heard an odd noise coming from a nearby cliff. As to what was making the noise, neither knew. When they went to investigate, they saw a "large, hairy, manlike animal that sprung from behind the cliff face." The creature ran off into the mountains "with the speed of the wind."

Simons and Gore both shot at the creature, with Gore hitting it on the arm. The creature stopped and grabbed its arm, and then suddenly turned and charged towards the two hunters! Both dropped their rifles and booked it out of there, managing to get away from the beast. The Daily Union also mentioned several other stories of a strange creature similar to the one the hunters saw.

Australia is also said to be home to an unknown, man-like creature. It's name is the Yahoo, or, more commonly today, the Yowie. Reports of yowies and sasaquatch are quite similar and it has led some to think they could be related species or the same type of creature, if they are real, that is.


Also like Bigfoot, supposed sightings of the Yowie go back many, many years. Throughout the 1800s newspapers reported encounters with "wild men" in the bush that sound surprisingly similar to those reported in America at the same time.

Below is a small sampling of Australian reports.

From The Maitland Mercry and Hunter River General Advertiser (Oct. 21, 1871):

The 'Yahoo,' or 'Debil Debil': "We were informed a few days ago that Windsor and its neighborhood had been thrown into great excitement by the capture of a bunyip, 'Yahoo,' 'Debil Debil' or some other equally extraordinary creature, at Webb's Creek, Lower Hawkesbury, and that, as its like had never been seen by the oldest inhabitants, it was determined to forward the wonderful animal to Sydney, and there exhibit the wonderful animal to Sydney, and there exhibit it to a wondering and grateful public. This was accordingly done, and the Yahoo has been on exhibition during the last few days at 228, Pitt-street, next to Mr. Weir, the butcher's, establishment. An inspection proved the animal to be a large wombat, of the species known as 'platyrhinus,' which is peculiar to New South Wales. The brute weighs about 100 lbs., and gave his captors a tough job to secure him."

Though the subject of this article turned out to be a wombat, it does show that stories of the "yahoo" and similar things were known at the time.

IS IT A GORILLA?: "MOLONG, Thursday. - Considerable commotion has been caused in the Euchareena side of this district by the circulation of a rumor to the effect that a hairy man, or gorilla, had been seen in the depths of the bush there. Two well-known and highly-reputable residents report having seen the fearsome-looking object. A youth, who unconsciously rode up in close proximity to the animal, received such a start that he hit out for home in record time. He has no doubt whatever but that the animal is a gorilla. For years past strange sounds have been heard in the thick scrub close to where this animal was seen, and a project is now on foot to form a search party and solve the mystery."

Of course, there are no gorillas in Australia - so what was this creature?

One interesting note, though, is that the term "gorilla" is also commonly used in newspaper accounts from North America throughout the 1800s.

What are we to make of similarities between reports of the same type of creature on two separate continents. Well, either both America and Australia are home to giant-size, man-like primates, or something of a more folkloric nature is going on. Are the reports similar (then and today)? Yes. Are they conclusive proof that Bigfoot and Yowie exist? No. But they are interesting.

*Portions of this article are excerpted from my new book Buckeye Beasts: Historical Accounts of "Gorillas," "Wild Men," and Other Hairy Monsters in Ohio.* If you read it be sure to leave a review on Amazon and Goodreads! 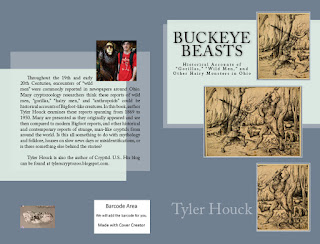