By Tyler June 16, 2018
Seebert Road, in Pocahontas County, West Virginia, may be haunted by a ghostly figure.

In 1992, three people were returning to the campground at Watoga State Park after a snack-run into Marlinton. It was around midnight, and foggy out. After they turned onto Seebert Road from U.S. 219, they had a very strange experience. When they were only about a mile off U.S. 219, a figure - and a very tall one at that - rose up next to a fence post on the right side of the road.

The figure "sprang straight up, without bending his knees in a perfect arch, similar to the way Dracula rises out of his casket in the 1990s from Bram Stroker's Dracula but much faster." Jonathan Moore includes this story in his book True West Virginia Ghost Stories, and in it the witness says the "man" "stared intently at the car as we drove past, turning only his head to follow the car." The figure did not move or follow them.

The witness continued with his description of the apparition: "The figure was at least 6-1/2 feet tall, bald and had an eerie halo-like glow around his entire body. It almost reflected in the fog. His body was self-illuminated and not an image caused by the car's headlights. I know this because the figure was looking right at me as we drove by, well out of headlight range."

"One very distinctive feature I remember was that he was bald and the stare from his eyes was incredibly intense."

All three witnesses asked "Did you see what I just saw?" after they passed the figure. "We all did," the witness quoted in Moore's book said, "and still confirm that was no human figure. It would have been impossible for anyone to rise from a supine position in that fashion." They were all "creeped out" with "chills on the back of [their] necks." 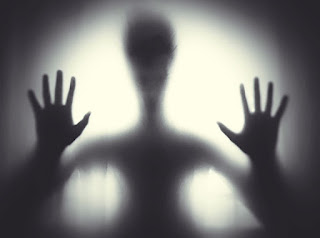 Although I do not know which of the witnesses it was who gave the account for Jonathan Moore's book, one of them, Matt Turner, told the story on the Discovery Kids show Mystery Hunters in a Season 3 episode featuring the fence post ghost.

He told host Christina Broccolini: "It was very bizarre. It was about midnight, as we came upon the bend here, we saw something unlike anything we'd seen before. It looked like a very tall man, probably seven feet tall. He was bald and had these very intense eyes. He stared at our car as we drove past. It was able to rise straight from the ground, laying down on its back, straight up, without bending at the hips."

What did the three men see that night? Is there a spirit haunting Seebert Road? In Mystery Hunters, it is noted that many soldiers died in that area during the Civil War, and the possibility of the figure being the ghost of one of those soldiers is brought up, as well as the possibility that the "ghost" could have been someone pulling a prank.

This one account is the only thing I've been able to dig up on the "fence post ghost," so if others have seen something strange along Seebert Road, it remains unreported.

Whatever it was, this sighting of a "ghost" along Seebert Road will likely remain a mystery. If anyone else knows of other strange things happening along the road, I'd love to hear from you. 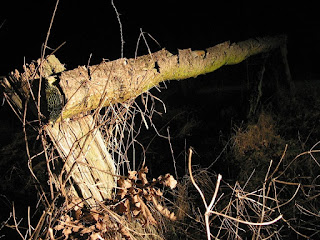 *This post is #10 in a series concerning legends and folklore of monsters and paranormal beings throughout the USA. Check the label to see the others.*

The episode of Mystery Hunters featuring the ghost story can be seen below: