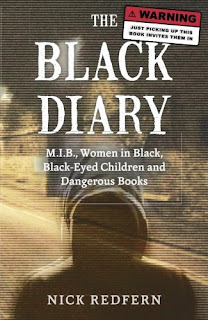 I recently got a review copy of Nick Redfern's newest book The Black Diary from publisher Lisa Hagan Books. This is Nick's third book in a series on the subject. The other two are Men in Black and Women in Black. This book focuses on both subjects (along with other related ones) and Nick's experiences over a roughly three-year period.


In the book, Nick covers all sorts of stories he has received from people concerning MIB, WIB, black-eye children, and all manner of things dark and mysterious. Are they from the government, something paranormal, or just creepy guys in black suits?

The story starts in 2014, and continues to late last year. Nick relates some personal experiences he's had (of the very odd kind) and lots of other creepy tales. It is formatted like a diary - in each chapter, certain dates are mentioned and Nick then goes on to explain what happened on that date, be it an odd experience or a new report he received. Lots of subjects are involved as well, not just MIB/WIB - cases involving them and werewolves, UFOs, disappearing battleships and even certain movies are included in the book.

What are the MIB? The book is full of reports of strange suited figures that could almost sound non-human. To me, though, some just sound like creepy people dressed up in dark clothes. Two people who tried to get information on Neil Armstrong (where he lived, where his kids went to school, etc) sound like that to me. Other accounts, though, are a bit more odd.

For some reason my favorite parts of the book were the ones when Nick just discussed what was going on in his day-to-day life. Weird occurrences are sprinkled in when going to conferences, watching movies late at night, or feeding the semi-stray cat. What should we make of these reports? You decide. But beware - reading this book late at night may not be the best idea!