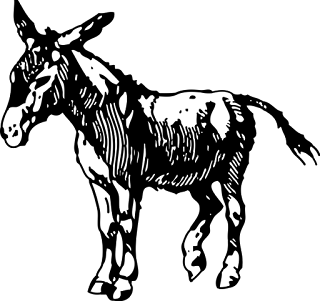 Donkey Lady Bridge is located on Applewhite Road in San Antonio, Texas. While San Antonio may not spring to mind when people think of places with legends of monsters, the bridge is supposedly the haunts of a terrifying mutant monstrosity called, as you may have guessed, the donkey lady.

"Her name might sound somewhat comical, but there is nothing to laugh about when it comes to a certain supernatural entity that haunts a particular part of San Antonia, Texas," writes author and paranormal investigator Nick Redfern. "For decades, she has provoked both fear and intrigue in the residents of the city and its surroundings."

Though the dates sometimes vary (as they often to with folklore like this), the story goes that late one night, a woman in the area was horribly disfigured in a fire. Some say that a man who had beat the family's donkey was the one who burned her house down. The woman's husband was shot and her children burned in the house fire. She, however, managed to survive, though her entire body was burned, with her fingers burned to only stumps, and her face became mangled,  with an elongated, almost donkey-like appearance.
The donkey lady is said to roam the area around the bridge in search of her lost children and is known to cry for them in the middle of the night. People who have gone to the bridge have reported hearing shrieks coming from underneath it and from the surrounding woods. The donkey lady has been reported walking under the bridge as well.

Honking a car horn is supposedly the best way to get the donkey lady to appear. Through the years people have reported her appearing afterwards, and she is said to jump on cars, denting the hoods and even breaking windshields with her hooves. Other versions of the story say that if you park your car on the bridge and call out her name three times (similar to Bloody Mary), she will appear. Some sources say that there is a phone number connected to the legend and, if you call it, you will hear the donkey lady's hooves getting closer and closer to you.

In several ways, the legend of the donkey lady is similar to many other stories from other places in the United States. Many bridges are associated with similar creatures like goatmen and spirits. And, like them, there are many variations to the stories.

Though likely just folklore, the legend of the donkey lady of Donkey Lady Bridge will likely live on for many years to come.

*This post is the third in a series concerning legends and folklore of monsters and paranormal beings throughout the USA. Check the label to see the others.*