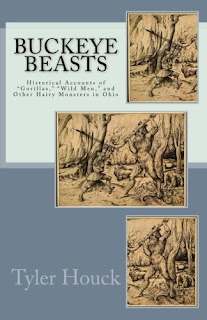 My new book  Buckeye Beasts: Historical Accounts of "Gorillas," "Wild Men," and Other Hairy Monsters in Ohio is available now on Amazon… below is an account from the book of a story that ran in the Newark Advocate (Newark, Ohio) on October 12, 1902.

New Philadelphia, O., Oct. 12 - The people of this community are greatly exercised over the stories related by wayfarers that a wild man, who[se] haunts are the woods, is at large. Mothers have warned their boys and girls to keep within calling distance. While their fathers are on the lookout for the creature that has suddenly become a menace to hickory nut parties.

Th wild man is said to be a giant in stature and to roam about without a stitch of clothing on his body. As fleet as the wind and lithe as the deer he has so far outdistanced the swiftest hounds that have been put on his trail by their masters. Some men all but cornered him Monday night, but were afraid to tackle him. He tore up a handful of grass and munched it while the hunters were in view. Then he ran away.

The fact that it is noted that he had no clothing on his body, though, and was "giant in stature" is another thing this report has in common with modern Bigfoot accounts.

Spread the word about the book… if you like it, be sure to leave a review on Amazon!