By Tyler February 03, 2018
Has a thunderbird been seen in Alaska? Yesterday, Juneau Empire reported on a sighting that occurred in Mendenhall Valley last month… 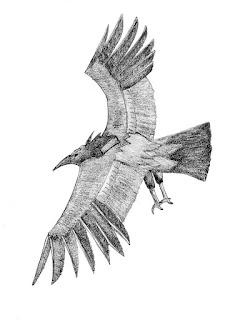 "According to several eyewitness reports, a bird with a wingspan nearly the width of Mendenhall Loop Road has been spotted in the Mendenhall Valley.

"The cryptozoological curiosity stems from a post in the popular Facebook page 'Juneau Community Collective,' brought to the attention of the Empire by several readers. The Empire couldn't track down a clear explanation of what the bird was, but we did talk to some bird experts and did a little digging on similar sightings around Alaska.

"'Attn; I was just driving by the movie theater in the Valley and there was a huge black bird flying above the road. The wingspan had to be at-least 20 feet, it was almost as wide as the read. I have lived here all my life and have never seen anything like that, it freaked me out. It was not a raven or an eagle. This isn't a joke. This thing was HUJE, almost the size of a small airplane. Did anyone else see it?'

"The sighting was backed up by several others in a  long comment thread on the post. Some were poking fun at the idea of a thunderbird or pterodactyl in the valley, but others weren't so skeptical.

"Bauer, recounting the sighting to the Empire a few days after spotting the bird, said it was 'like an eagle, but five times as big.' She couldn't think of any other way to describe the odd encounter.

"She spotted it around 4 p.m. on Jan. 16, what would have been dusk. Bauer was driving to the bank, alone in her car.

"'Right before the movie theater, I looked ahead of me and it was towards Superbear direction,' Bauer said, referencing the grocery store in the Mendenhall Mall and Gross Alaska theatre's Glacier Cinema.

"There was rain on her windshield, so she turned on her wipers to clear the view.

"That was when she saw a massive, jet-black bird with a short tail flying level with the treetops over Mendenhall Loop Road toward her. Bauer said the bird flapped its wings, soared a little higher, and flew at a fast clip over her car about 50 feet in the air.

"'I looked up and right at that point, there was a gigantic, huge black bird flying right above my truck. it was basically following the roadway along the treetops.

"'I slowed down to try to get  a better look at it. It was heading toward the glacier, the wingspan was almost as wide as the road,' Bauer said, adding, 'It was the biggest thing I've ever seen in my life. It was very concerning. I've never seen anything like that.'

"Bauer said that it definitely had feathers, but she couldn't make out a beak.

"'The body of it itself had to have been six to eight feet,' Bauer said. 'I know it sounds nuts - I've been getting a lot of crap on Facebook about it like I am crazy - but I wanted to post it in case anyone else had seen it.'

"Another woman, who asked that the Empire use only her first name, Diane, said she saw something very similar - this time perched, or attempting to perch, in a tree near her house late at night a few years ago.

"Diane went outside to smoke a cigarette at her Lemon Creek home and noticed that all the birds in the area were excited.

"'All you heard was the whooshing sound in my tree. I went inside and grabbed a flashlight. It was so large, I couldn't even get an outline of what type of bird it was,' Diane said.

"Diane noticed downed branches littered her yard in the morning.

"'That sounds crazy, but it was huge,' she said. 'I don't even go camping anymore.'

"Both of these accounts sound similar to a national headline-making event in 2002, when a very large bird was spotted in Southcentral Alaska.

"A heavy equipment operator from Togiak spotted the bird then.

"'At first I thought it was one of those old-time Otter planes,' the Alaskan Dispatch News (now the Anchorage Daily News) quoted Moses Coupchiak, 43, a heavy equipment operator from Togiak, as saying. 'Instead of continuing toward me, it backed to the left, and that's when I noticed it wasn't a plane.'

"So what could this be? It's debatable what the biggest bird in Alaska is, but one candidate is the black-footed albatross, U.S. Fish and Wildlife Service raptor biologist Steve Lewis said. They can have a wingspan of  6-8 feet.

"But it's highly unlikely an albatross would venture into the valley. Strong winds can sometimes blow an albatross inland, but they're generally ocean-going birds that stick to the coast, Lewis said.


"'Over the water there's a potential to see something that may have wings like an albatross, but wouldn't be jet back and wouldn't be over the valley at all,' Lewis said.

"The Stellar's eagle is another candidate. Like the black-footed albatross, those can have a wingspan of 6-8 feet. They generally don't venture as far north as Juneau, but as recently as the 1990s they were consistently spotted only a few miles from Juneau on the Taku River, near Canada.

"A third, more likely explanation is that the bird was an immature female bald eagle. Those are the largest birds that are frequently in the area, Lewis said. Young bald eagles have bigger feathers than older eagles, he explained, which aid them as they learn to fly and can make them look larger than they are.

"Female bald eagles are generally larger than their male counterparts, Lewis added. Their job in a mating pair is to defend the nest, so it helps to be big and imposing to scare off potential nest robbers.

"Bauer and Diane were both adamant about the size of the bird, so neither the albatross, Stellar's eagle or immature female bald eagle squares with their account. They're both too small and the wrong colors.

"The Federal Aviation Administration didn't return calls to this story, but since both eyewitnesses described seeing this thing flap its wings, it's unlikely it was a glider or a large drone, by their accounts."

What did these people see? I would say there is no possible way it could have been a pterosaur, as some said, and they could have misidentified known birds, perhaps and eagle. Or is there really a giant bird in the area?

If any more sightings of giant birds are reported from the Mendenhall Valley area, I will share the stories here on TCZ.