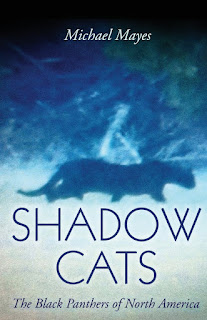 At the end of January, Anomalist Books published a new title from cryptid investigator Michael Mayes, who runs the Texas Cryptid Hunter blog. The book is Shadow Cats: The Black Panthers of North America, and, as the title suggests, it is an examination of sightings of anomalous big cats in the United States, primarily focused on the American South and the author's home state of Texas.

Mayes starts off his book by going over the anecdotal history of "black panthers" and the history of the term. He notes that, in the South, the term "panther" is always used to describe black cats, and differentiates from normal-colored pumas or jaguars. Several chapters are also devoted to historical and contemporary sightings and reports of large black cats in the American South.

Chapters 6-10 examine the possible suspects. Mayes goes over the biology and diversity of several cat species that could possibly be misidentified by witnesses as black panthers. These cats include pumas, jaguars, jaguarundis, escaped/released exotic cats, like tigers and lions, and possible large feral cats.

After going over the suspects, Mayes goes into the science behind melanism, which causes cats and other animals to be all black in color. This is done to see if melanism occurs in any of the species Mayes thinks may be behind (part of) the black panther mystery.

Two chapters are devoted to photographs of possible black panthers and hair samples Mayes received from someone who claimed they hit one of the cats with their car. Mayes also asked several experts of big cats about what they think of the black panther mystery and what animals could cause the sightings.

To know what Mayes concluded on the mystery of anomalous black panthers of North America, you'll have to check out the book yourself. This is one of the only books I know of that examines the North American black panther mystery as a whole, and it is an excellent resource to those interested in the subject.

You can get Shadow Cats here.