By Tyler Houck July 02, 2015
In 1933, writer Elliot Merrick told the story of a creature he called "The Traverspine 'Gorilla'" that was supposedly seen in Labrador, Canada, about twenty years earlier. Here are some accounts of sightings of this "gorilla":

"One afternoon a young girl was playing in front of her parents' cabin when she saw a large animal covered with short white fur, walking erect and appearing to have practically no neck, come out of the forest and start towards her. She very reasonably ran screaming into the house where her mother barred the door and the creature went away. However, it returned at night and walked around the cabin beating on the walls, apparently with a branch or another piece of wood. During the following days the men of the area tracked it hoping to shoot it. They claimed to have seen it at a distance several times, but never got a clear shot at it. For some time it continued to come back at night, frightening the inhabitants of the community, and then at length it simply disappeared. The local people explained it as apparently being a gorilla which had somehow found its way into the local forest."


A woman named Mrs. Michelin once spotted the "gorilla," too:

"All I could see was the moving bush and the shape of a great animal standing seven feet tall in the alders. It seemed to have a sort of white ruff across the top of its head, I could not make out the rest. I fired into the bushes and I heard the shot hit. I went back into the house and bolted the door. It never came back and there was blood where it had stood when the men from the sawmill came back."


The beast also left footprints that were twelve inches long, narrow at the heel, and had two "broad, round ended toes." 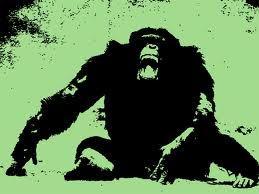 Whatever the Traverpine Gorilla really was, it doesn't sound like a gorilla to me. The description does, however, sound quite a bit like a Bigfoot, except for only having two toes on the feet. We will probably never have the answer, however, as the sightings occurred over 100 years ago.