By Tyler Houck July 01, 2015
Today, there are lots of reports of Dogmen. They are said to have human-like bodies, dog legs, paws for hands, tails, and canine faces. And, they're bipedal. But, they are not a recent phenomenon. 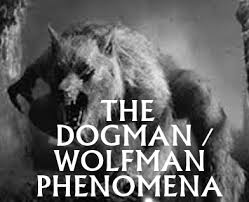 An old report of a possible Dogman is the subject of Nick Redfern's  newest Mysterious Universe Article. The story was published in several newspapers in 1905, and was called "Dog With a Human Face - Strange Monstrosity Seen By Many Persons In Colorado Hills - Attempt Capture in Vain." Redfern goes on to describe a woman's sighting of this "dog with a human face." Could it be an old report of a Dogman? Maybe. There wouldn't be anyone who knew of the word "Dogman" in 1905, just like old newspapers told of encounters with "wildmen" and "gorillas" that could possibly be Bigfoot.

You can find out more on the "dog with a human face" on Mysterious Universe.

This is also the 500th post on Tyler's Cryptozoo! Thanks to everyone who checks out this blog!