Many people believe that the creatures called Bigfoot, Sasquatch, Skunk Ape, MoMo, Grassman, Oh-Mah, etc. live in the wilds of North America. Some say that these creatures aren't real. Others think they are remnants of Gigantopithecus that came to North America on the land bridge connecting it to Asia a few thousand years ago. Some Native Americans, however, think the Bigfoot creatures are something spiritual. But, starting in the '60s and '70s, a new aspect of the Bigfoot phenomenon appeared, and that was the connection to UFOs.


The general public had known about Bigfoot for about 16 years. It was 1973, and residents of Pennsylvania started reporting strange encounters with large, hairy, man-like creatures. At the same time, there were tons of reports of strange objects and lights being seen in the sky. The great Bigfoot/UFO flap of 1973 had begun.

The reports had actually begun a year before in 1972. At the time several people had reported seeing UFOs, and others reported seeing mysterious ape-like beings. That fall, some people near Latrobe, Pennsylvania, saw a black haired, chimpanzee-like animal on two legs climb over a guard rail. Later, other residents saw what they thought was a gorilla.  A family reported hearing strange sounds outside one night, and the next day they found a strange footprint.
Things really took off the next year, when Bigfoot creatures and UFOs were reported all the time to Stan Gordon's research group the WCUFOSG, a lot of times many days in a row and also many reports on the same day. Lots were of people seeing Bigfoots, and lots were of people seeing strange lights in the sky. Some reports, however, were very odd. In one, the witness say Bigfoots coming off of a UFO. In another, two teenage girls saw a white Bigfoot holding a glowing orb in one hand. Their father investigated when they came home and saw a strange object moving in the sky that shot a beam of light down to the ground. In another report, several people saw a UFO flying over a farm. One witness was the son of the people who lived there, and the others were family members and a few neighbors. The UFO landed in a field and the man and two others went out to investigate. They saw two Bigfoot creatures, one bigger than the other. The man fired a gun at the two creatures, but it did nothing. They called the police, who later contacted the WCUFOSG and Stan Gordon. When Stan went to investigate later that night(about 1 AM) the animals on the farm were still acting strange. The UFO had left a glowing circle in the field, and although it was now gone, the animals would not go near that area. When Stan was there investigating, the main witness, Steve, began acting strange. He started growling and screaming like a wild animal and was running around like a nut. He growled at the other people there several times and it took multiple people to get a hold of him, and he threw them to the ground with ease. He then fell flat on his face and was out cold. When he regained consciousness he remembered the encounter with the creature but not when he acted strange. He did remember, however, seeing a man dressed in a black robe and black hat carrying a sickle. The man or whatever it was told Steve the world would end if humanity didn't change its ways.

Later Stan asked Steve if he wanted to be hypnotized to see if it could make him remember more about that night. When he did, Steve asked why they wanted to hypnotize him again, but they never had. Steve said he was visited by two men who had hypnotized him and shown him pictures of UFOs and Bigfoot creatures like the ones he had seen. Many think those men were MIB.


Are these instances proof that Bigfoot and UFOs are related? There were many, many, many other sightings in Pennsylvania in 1973 and 1974 and there have been other UFO-Bigfoot instances elsewhere. There have even been some reports of  Dogmen being seen with UFOs. 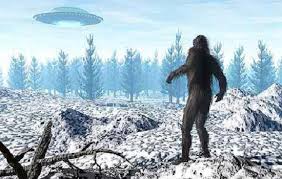 Monsters and Mysteries in America had two episodes on the Pennsylvania sightings within the last year. In 2010, Stan Gordon published a book on the UFO-Bigfoot sightings that I am currently reading called Silent Invasion: The Pennsylvania Ufo-Bigfoot Casebook. So far the book has been very good. Expect a review of it on here sometime soon. I have also started a UFO blog called UFO Zone. A few weeks ago I saw UFOs: Best Evidence Ever Caught on Tape and UFOs: Best Evidence Ever Caught on Tape 2 on Destination America and that has really gotten me interested in UFOs.  But, having said that, don't expect me to stop posting about cryptozoology on here. I still do more with that than UFOs. Now, reader, what do you think? Are Bigfoot and UFOs connected in some way, or are they two totally separate things? Why would Men In Black come after a sighting of a UFO and two Bigfoots? Maybe the answer is hiding somewhere out in the woods, or out in the stars.

Here's a quick video on UFOs and Bigfoot: